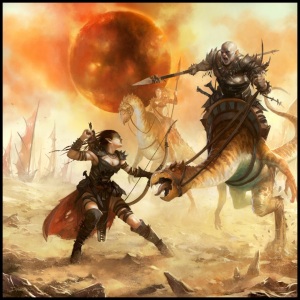 A long while back my group was willing to jump back into a fantasy setting, but they wanted something very different from your typical Tolkien-esque world. So it was agreed to run a Dark Sun game using Savage Worlds. Unfortunately that meant I had to dig up some conversions of the setting for those rules.

Digging around however I found quite a few treasures. There are some great SW conversions for Dark Sun. I opted to merge a lot of different sources into a single setting PDF. As part of this, I also wanted to tinker a bit with armor and weapons. A while back I posted on a wonderful idea for keeping track of encumbrance that I found on another blog. So I altered the weight of different weapons expressing them as inventory space slots to fit that encumbrance system.

My group had a lot of fun running around Athas. Sadly, some folks moved out of the country and others moved to another city, so we ended the campaign. Still it was enjoyable while it lasted and likely a setting I’ll revisit again.

EDIT: Doing some digging I managed to track down the person responsible for the bulk of the racial text and the individual that did the foundation to much of the conversion, Rich Ranallo. You can dig through Savage Heroes to find his original conversion.