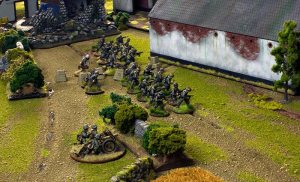 Some time back I lamented about LMGs in Bolt Action. They aren’t the only rough spot with the rules for me. While I understand the philosophy of some game elements being the way they are, it does at times seem to run roughshod with historical accuracy. Another big stickler with me was transports not being able to fire mounted weapons without passengers. I get why it was done this way (to prevent a bunch of mobile LMG platforms running around), but this sort of flies in the face of some nation’s tactics using armored troop carriers.

Other folks have taken up the mantle for using standard house rules. I think it’s a good idea. For house rules, I always liked having a document prepared to pass around before the game. It’s nice to be able to trumpet loud and clear rule changes you are playing with. So here are my limited list of house rules that can be found in the downloads section.

LMG point cost – I’ve talked about it before. LMGs are broken with their point costs. They cost far more than what they are worth on the tabletop. I’ve opted to drop the requirement of having a loader. It’s likely still overpriced, but at least they are no longer throwing out less attack dice than an equivalent point squad armed with rifles only.

Transports firing weapons without passengers – Another stickler with me was requiring passengers to fire transport weapons. My solution likely adds to the ‘problem’ of roaming LMG teams. However I like the idea that transports can throw their firepower into the mix without needing passengers, but it’s limited to fire orders only.

Fixed weapons rotating – I find it interesting that Beyond the Gates of Antares, a sci-fi sister to Bolt Action, has this rule in place. Not being able to rotate fixed weapons at all seriously hindered MMG and AT guns. Being able to do so now allows them some more flexible use on the table.

Priority air strikes – It’s always a crap shoot with air support. Not only can it bounce and hit your units, but you might flub your support roll getting a strafing attack instead if targeting a tank. It’s a little too random. While there are optional air rules out there, I thought about instead allowing the air observer a greater chance of calling in heavy air support. It still is risky, but can be mitigated with taking a veteran observer (again offering an advantage if doing so).

MMG/HMG teams and pins – MMG teams to me seem fragile and despite the volume of fire they can throw onto a unit, they can only inflict one pin. Being able to rotate helps however I decided to add a new weapon tag, suppression. MMGs when targeting infantry units now have a 1 in 3 chance of dropping 2 pins on a target unit instead of 1. It’s just a little boost to indicate these weapons are effective at forcing infantry to keep their head down.

Deviating smoke rounds – I am not keen with the indirect smoke round rules. It’s too much in the hands of your opponent. I’m more favorable with random deviation on the round lands instead. The distance is also random, and can also drop closer to the target area which might actually make it work too well. But I dig the idea of using smoke more and the rules in the book discourage it.

So these are my changes. I haven’t dabbled much in vehicle flamethrowers. I understand they certainly could use tweaking based on the grumbling on various forums. That might be something else to add to the list at a later date. Hope folks get some use out of these rules (or at least inspire you all to whip up some of your own).