A while back I talked about some places to pick up war game supplies in Seoul. Fortunately for board games, you’ve got a better selection. Board gaming is a relatively popular hobby in Korea, with the CCG scene being particularly popular with younger kids. One of my favorites is Rolling Dice. Now, it’s really a sister store to Dive Dice which also operates an online store. In fact the map I have in the post directs to that name, but the storefront in Hongdaejeom is Rolling Dice.

The store is fairly large, with a pretty nice selection of board games. What I failed to take a pic of is another wall of Magic and X-Wing miniatures, along with another full shelf of Korean Board games. Yup, the pic you have here are just some of the selection of games in English.

The place is pretty hopping the weekends I’ve visited. It looks like Magic has a fairly fervent following with several tables filled with players. With a small shelf of snacks and a bathroom on the facilities, you can say they take gaming in store pretty seriously. Unfortunately for non-Koreans, it seems regional language is the norm for the decks I saw, but there were a few ex-pats having some games (and I expect with the right app, you could get a language translation of cards if needed in a pinch).

To get there, take subway line 2 to Hongik university. Get out at exit 2 and head off for a street parallel to the main avenue. You can see the pin marker on the map pic below for the storefront. Look for it on the 3rd floor of a commercial building. The store hours are a bit wonky and more for the late night crowd. They typically open after 3PM and will stay open Fridays and Saturdays till 12PM. So be sure to swing by the place late afternoon/early evening.

Rolling Dice offers typical retail prices. I’ve gotten quite a few games from overseas distributors and have to say having a local source in Korea will save you tons in shipping, even if you’re playing retail costs. For an expat board gamer, this is a great store to check out. Be sure to give them a look if you are ever in Seoul. 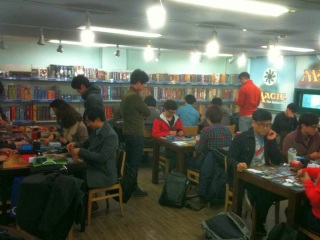