The Pomdarians were an ancient race of lizard folk that created a great empire of arcane marvels. Thousands of years since their demise many of their mysterious monuments still litter the southern jungles. Some legends say that they fell into warring factions, wielding powerful magics that resulted in the destruction of their race.

Other legends speak of a great religious movement which rebelled against their affinity of the arcane, choosing instead to worship primal gods. This divergence in philosophy was so pronounced it actually split the lineage of the Pomdarians into two races, the primal lizardmen and the magic-touched dragonborn (although few historians would be foolish enough to bring up such a topic in earshot of either race). 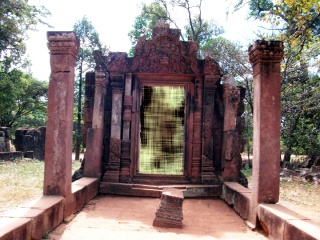 Still others claim that the great network of portals created by the Pomdarians lead to their downfall. Use of these portals weakened the normal boundaries of the physical world and that of the great beyond. Horrible aberrations slipped into the known world and brought down their great civilization, likely explaining the origins of many monstrous creatures in the world today.

No one can state the real reason for the fall of the Pomdarian empire. What cannot be refuted is that this grand civilization reached an epoch, and in the matter of a few years slid into obscurity, utterly wiped from world existence. One part that remains of their enigmatic past is the sparse number of standing portal gates scattered among the deep jungles.

Many times there have been attempts to map and categorize the portal doors by the League of Imperial Arcanists. Still to this day their efforts have been in vain. One simply knows that you enter the gateway, and emerge from another random portal gate. Most of the gates have been discovered and are within the boundaries of many towns or cities, however the discovery of another portal ruin is not unknown. What compounds the complexity of categorizing these portals is the inexplicable length of time one can enter another gateway. Once a person enters, they cannot reenter a portal gate for up to a week. And when they can do so, it inevitably will lead them to another location.

A few steely merchants are willing to make use of these portals. The gamble is that such merchants will not know where they land and what are the desires of their potential customers. Hence, usually they ply staple goods that will sell in just about any city. What makes this journey even of more risk is that some gates lead to ruins deep within the wilderness. Even darker tales circulate of merchants that enter the portals never to be seen again. Either they arrive at some other gate buried in some deep cavernous ruins, surrounded by foul monsters, or they slip out of this world entirely.

Such rumors are fodder for many companies of adventurers. Stout hearted heroes willing to step into the shimmering ruin gateways in hopes of landing at some undiscovered location. If one found lost ruins of the Pomdarians at some previously unknown destination, clearly there could be riches, or at least find the League of Imperial Arcanists willing to pay handsomely for any maps and proof of such ruins existing.

This site uses Akismet to reduce spam. Learn how your comment data is processed.