My wife is Korean. Last year there was a death in the family and I was unable to travel to another city for the funeral. Late at night my wife returned and from the parking lot downstairs she called me, ‘Come downstairs and bring the salt.’ No clue why she wanted it but I comply with the wishes of my CO. As I come to her car she steps out and grabs a palmful of salt tossing it over herself and then tossed some over the top of her car. Walking up to our apartment she called back over her shoulder, ‘To ward off evil spirits.’

Now as an American I sometimes roll my eyes at stuff like this, but I realize Americans do similar things too. Next time you are in an elevator for a highrise office building, see if you can find a button for floor 13. Once when it was pouring here in Korea I walked in with a dripping wet umbrella. My coworker took it from my hands and opened it up out in the hallway. For a brief instant I thought about bad luck, then I realized how clever it was to allow the umbrella to dry quickly exposing more surface area (rather than being bunched up when it is closed). Cultures have superstitions, and it’s amazing how pervasive they are. 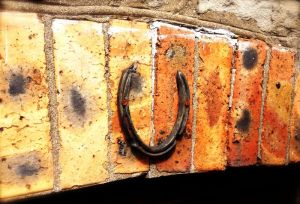 For RPGs, superstitions are a great way to add some local color to a city or people. Further it’s something that can go beyond religious beliefs, being part of the culture for a group. Maybe every doorway holds a simple wind chime to ward off spirits. Maybe for every cup of ale one drinks in the local tavern, you dip in your thumb and press it on the table while you take the first draught. These small details can bring a lot of life to the fantasy world you create and even better, allow for some local flavor from town to town rather than it being another nondescript village.

Superstitions are also ripe for adventure fodder. In a world of fantastic creatures maybe there is a hint of truth to every dark superstition. It’s quite possible that a village hovel that doesn’t mark its doorway with a sigil might have some foul creature come at nightfall. Maybe players failing to follow a superstitious ritual are shunned, or given dire warnings (with ghostly consequences if they don’t follow a local custom). Not all superstitions have to be in place to ward off evil but could be done to avoid mischievous spirits.

Special events can also provide a backdrop for adventures. Festivals and a customary dinner revolving around a ritual can work too. While the players might be included as friendly participants, maybe they are considered outsiders and not welcome as part of the festivities. Maybe petty jealousies among villagers could lead to one fouling an offering or superstitious ward of a neighbor, bringing about some unforeseen horrible fate. Consider our Halloween and the Jack-O’-Lantern. What if a rival decided to smash his neighbor’s pumpkin in spite to bestow a bit of bad luck? Instead of some slight misfortune, the neighbor’s child is spirited away to the Fey. This could be a great setup for a one-shot adventure.

So the next time you describe a small village, consider looking at superstitions. They can offer an easy means to add some interesting detail to the locale and people, breathing a small amount of life into your world. They might even be a great source for a session’s adventure.

This site uses Akismet to reduce spam. Learn how your comment data is processed.